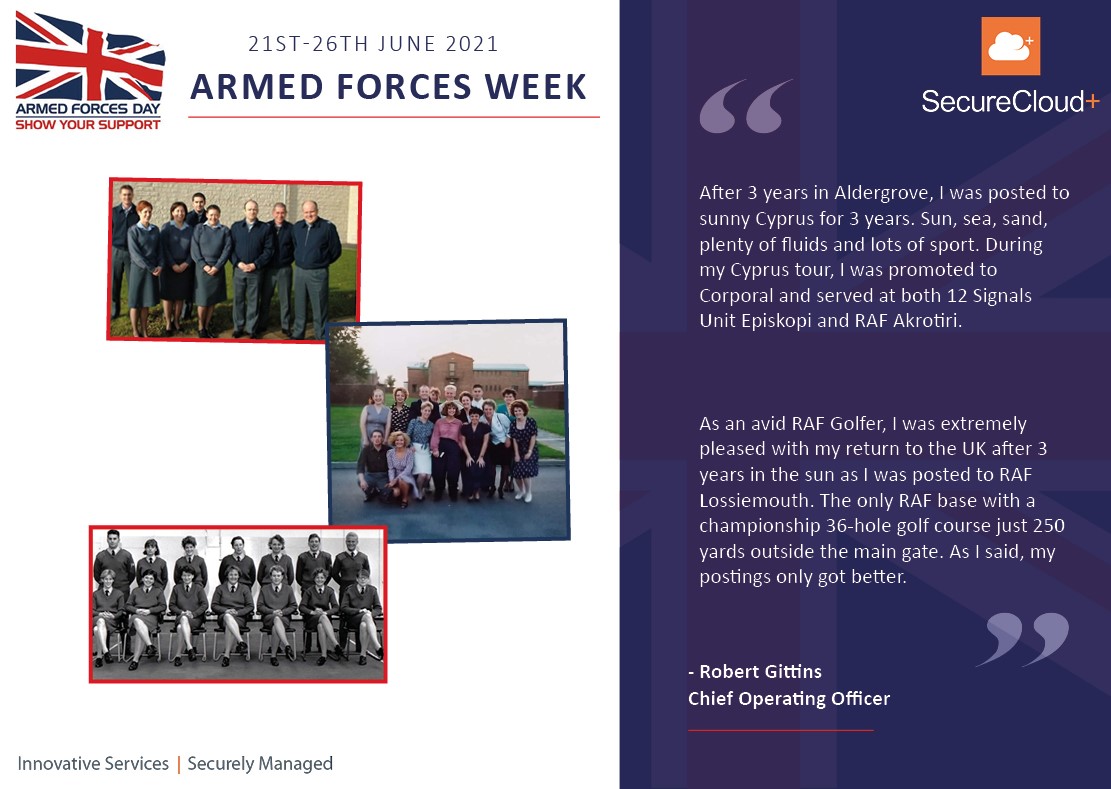 Rob Gittins, Chief Operating Officer for SecureCloud+ previously served for the RAF. This is his story during his 22 years served for the British Armed Forces.

On a wet cold morning in November 1987, I sat waiting nervously on the train station to begin my journey to RAF Swinderby for Basic Training with the RAF. Six or so weeks late, just after Christmas, I proudly marched onto the airfield for my pass-out parade as a fully-trained Airman.

A short spell at RAF Cosford for basic telephonist training (yes, I trained how to answer the telephone and operate a switchboard), then I was shortly posted to RAF Marham in early 1988. I got posted 12 months later to RAF Coltishall, just 50 miles down the road.

Shortly after, I was detached to RAF Locking (can be seen in pictures) where I undertook conversion training to a Telecommunications Operator (TCO). My career had elevated from answering the telephone to now typing at 40 words a minute.

Posted back to RAF Coltishall in 1990 on completion of my training, I met my lovely wife of 30 years who was also serving at a nearby unit. Married in late 1991, I was then posted to RAF Boulmer for a short stint and then onto RAF Aldergrove in Northern Ireland for 3 years. Anyone that has had the pleasure of this posting will agree it is a great unit and I have many fond memories.

After 3 years in Aldergrove, I was posted to sunny Cyprus for 3 years. Sun, sea, sand, plenty of fluids and lots of sport. During my Cyprus tour, I was promoted to Corporal and served at both 12 Signals Unit Episkopi and RAF Akrotiri.

As an avid RAF Golfer, I was extremely pleased with my return to the UK after 3 years in the sun as I was posted to RAF Lossiemouth. The only RAF base with a championship 36-hole golf course just 250 yards outside the main gate. As I said, my postings only got better.

Having been at RAF Lossiemouth for 18 months and with a stint on operational detachment in Saudi Arabia, I received a pleasant phone call from the posting desk asking if I would like an overseas posting to 11 Signals Unit in Rheindahlen, Germany. I think the conversation went: “You are good at football and golf aren’t you? Great, you’re coming with me to Germany.” So off I went to another great overseas posting in Germany, where I become multi-lingual… well in ordering beer anyway. ‘Ein grosse bier bitte’.

Another promotion from an overseas posting meant I was promoted to Sergeant and detached back to RAF Cosford (Picture 3) to complete my Trade Management Training (TMT) course. On return from Germany, I was posted back to an original haunt in RAF Coltishall, followed by a short stint in Bahrain on 4 months detachment.

Shortly after, I was seconded out to Industry with Global Crossing for 5 years to manage RAF Mail across 72,000 users and 56 worldwide locations, which set the foundations for management roles later in my career.

And here ended my 22-year career at the grand old age of 40 years. Today, I am Chief Operating Officer at SecureCloud+, often working with the RAF and putting all my experience to great use.